On the 5th March, Benidorm celebrates the Virgen del Sufragio , Suffering Virgen. The story told is that in 1740 a shipwreck was found along the Poniente Beach with no survivors, the locals as with much of Europe at the time, were so afraid of the plague they decided to push the boat straight back out to sea and set it alight. A wooden statue of the Virgin Mary was found some days later by a child, undamaged by the flames. Celebrations are staged every year now, in fancy dress as locals re-enact the event. A ship sets sail with the statue and the local people are honored to be chosen to bring it back to shore again. Flowers are brought to the church and parades with marching bands can be seen in the old town of Benidorm on this day.

Originally this fiesta started in the City of Valencia and although many other towns and villages have followed the tradition, Valencia is still the place to visit to really appreciate this week long celebration.

Traditionally Fallas was a time, to mark the arrival of Spring, that the carpenters of the City literally did a spring clean of their workshops and put out into the street pieces of wood they no longer required and then set them alight. Nowadays, the street burnings are on a much grander scale and starts the week before with the display of hundreds of highly decorated and often satirical sculptures depicting Spanish and world events. Every day there is a special competition for mascletas, a prize for who can build the loudest single firework.

On the 19th these wonderful sculptures are burnt ceremoniously in the streets in front of crowds of people.

Other towns following this tradition include Benidorm, although not on the same scale, will display and then burn their statues.

During the week which is filled with processions and townspeople in traditional costumes, a huge wooden statue of the Virgin will be decorated with flowers.

A fiesta not to be missed. 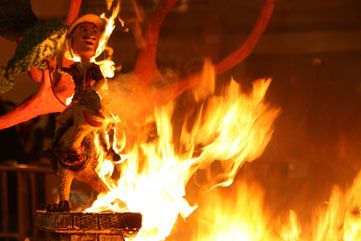